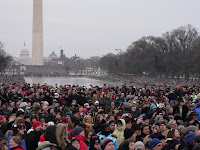 Today was the "We Are One" inauguration concert at the Lincoln Memorial. Thanks to Melissa's friend Liz, we had press credentials, so were stood audience's right, right at the foot of the memorial steps. The crowd went back as far as the Washington memorial (about half a mile), so we were incredibly lucky indeed. My 12x zoom got a lot of usage - full photos on Flickr. 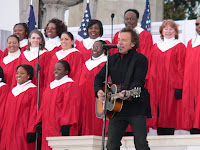 Stars included U2, Beyonce, Stevie Wonder, Bruce Springsteen, Denzel Washington, Tom Hanks, Usher, Jack Black. Both Joe Biden and Barack Obama did speeches. At the end of the concert, all the artists came out on stage, and once a lot of the crowd had left, Obama came out to see them - I was about 25 yards away and he gave us a little wave. I didn't have my camera ready though, unfortunately! 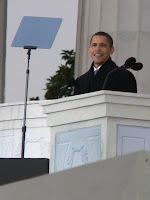 It was basically a live TV event, very polished and nicely shot (lots of big screens around the site). The artists sang patriotic songs and read patriotic readings, about previous presidents, the military, previous inaugurations, etc.

A great mood setter for the week ahead. And great preparation for the cold weather - I had my thermals on, and some of those hot gel packs in my shoes :) 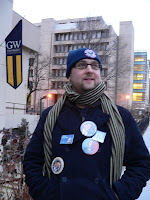 On the way back, I bought a beanie hat and 5 badges. I intend to buy a lot more tatt this week :)

Fantastic stuff, Sammy. Wish I'd been able to join you.