My new gimpPod, and, Why iPods actually cost more 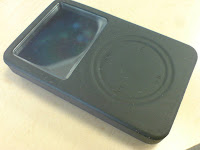 Thought I'd post a picture of my new iPod, dubbed the gimpPod because of the black wubber skin I bought for it. Pretty neat the way not one part of the actual pod is exposed, and the way the touchwheel can work beneath the rubber. Thanks to the lovely folks for a great birthday present.

I was surprised when the iPod arrived how much the iPod "package" has been paired down. A while ago I was musing about how cheap iPods are now, relative to when they first came out, and I put it down to scales of production and the iPods popularity. But actually, the accessories the iPod *doesn't* come with any more, more than make up the shortfall in cost. My 3G ipod, which cost about £300, came with -
That little £106 bunch of stuff all came in a really ornate, exciting-to-open, 6-inch cube of packaging, with software CD-ROM and user manual. All those things are missing from the iPod now, which comes in a box about the size of a fat double-CD jewel case. At £240, it just comes with headphones (<1m cable), USB lead, and cloth bag. Most irritating is the lack of mains charger - I now have to find a computer every time I want to charge my iPod.

So, if you do the maths, iPods are actually more expensive now than they were four years ago.
Posted by Sam Bailey at 2:27 pm 2 comments:

Interesting to hear that Hilary Clinton's campaign theme song is Right Here, Right Now by Jesus Jones - I suspect the identity of the artist performing the song is rarely mentioned by campaign staff. Here's a "live" performance of the song, from 1991.

I find the stupid over-performance, which doesn't fit the relatively mellow nature of the song, quite amusing. They think they're big hair rockers, but they're really not. Note especially the stupidly manic keyboard, none other than the self-indulgent prat Iain Baker, who recently left Xfm in a cloud of DLT-esque "I'm not happy with some of the changes around here" (friends in the know make it quite clear he was actually let go, probably for being, umm, a bit of a twat).
Posted by Sam Bailey at 9:34 am No comments: