Why Kentucky is so important

It's a while now since I've blogged about the American Presidential elections. That's because I've been storing up such gems as this one. Since I last blogged, I've been to Washington DC, seen lawmaking in progress, met the American people, started to understand what makes them tick.

I've stayed up late at night waiting for election results to come in, I've become familiar with names such as 'Wolf Blitzer' on CNN, and I get daily emails from Obama telling me how important my contribution is. I've been building up a map as the states have been won - pink for Hillary, blue for Barack - and it all finally appears to be boiling down to one key state.

That state is Kentucky. It has a mere 51 delegates up for grabs, and whether he wins it or not, it looks likely to finally push Obama into the majority of elected delegates, and could herald the retirement of Hillary Clinton from the race for the White House.

But, more importantly, it'll finally allow one of the candidates to "do Blockbusters" - connecting the Pacific to the Atlantic with a string of won states. Surely, the real prize in this contest? (eat your heart out Wolf, didn't think of THAT did you?) 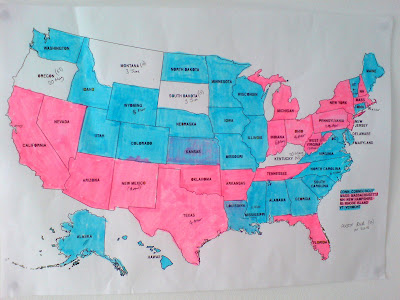 Posted by Sam Bailey at 2:18 pm No comments:

Every time I hear the new Biffy Clyro song (which I pretty much like btw) I think of Lay All Your Love On Me by Abba/Erasure if you prefer. Here's the comparison.