How to fit a dishwasher

It started out as a massive ivy bush, which fell over in a storm 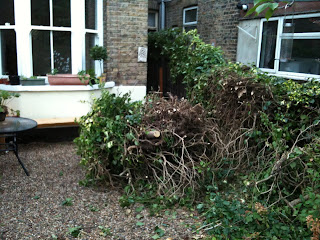 After much wrestling with twigs, there was then the extraction of a massive root 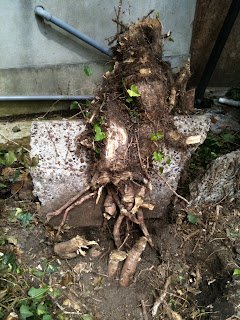 Then there was cleaning up a bit, and laying down a few railway sleepers discovered at the bottom of the garden 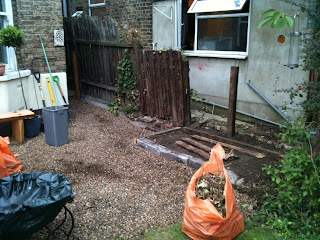 Then add a bamboo screen, and a few paving slabs 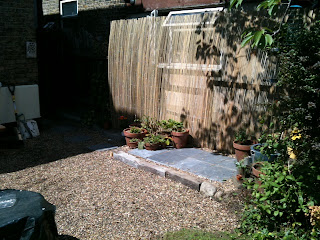 And now we've got a mini patio for pots and a barbecue.  Lovely.
Posted by Sam Bailey at 2:17 pm No comments:

I made a table!

Warning - this blog post is nerdy, and not particularly interesting. But I've spent weeks of brain power on this seemingly simple project, so I thought I'd write it all down. 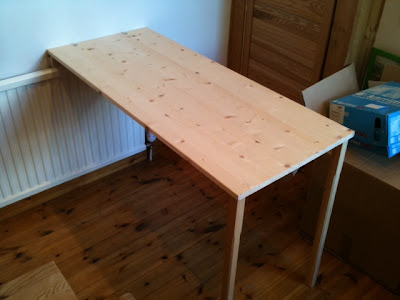 We've got a spare room in our house which my girlfriend decided from an early date would be our Craft Room. The main thing you need in a craft room is lots of surface space, but we also want the room to be versatile - for example, accommodate a put-up bed from time to time. So I set about designing a table that you could stow away. 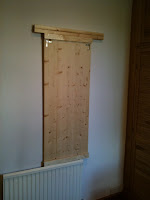 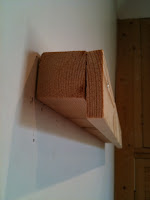 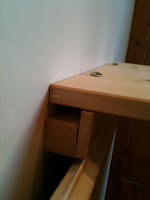 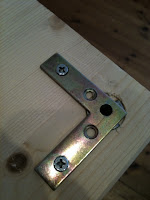 I'd tackled this engineering task before, in the camper van, and opted for a hinged table which folded download, with a fold-up leg. I thought about this for the craft room, but decided against it. The main reason is that I would need to hinge it upward instead of downward, meaning leaning on the table would put a constant strain on the hinge.

So instead, I opted for a table top that you entirely remove from its legs, and slide into a housing on the wall. The table top is a pre-made piece of pine furniture board, and the fixings on the wall are made from timber as well. When you set the table up, you lay it on the bottom fixing, and drop a couple of loose long bolts in to two holes, to hold (but not fasten) the table in place.

The trickier part of the job was finding screw-in table legs. I knew these would be hard to find, because I also looked during the campervan job. All of the table leg systems out there are for permanent fixing. I did manage to find a screw-in system from a small manufacturer called EES, but their legs were £20 each which I thought was too much.

Looking to make my own, what I really wanted to buy was a pair of these clinch nut plates, but nobody in the UK seems to sell them. Instead I made my own, using these simpler pronged tee nuts which you hammer into the underside of the table, and a pair of metal plates I had in my junk box to stop them popping out. I opted for two cheap £2 banister spindles for legs, and screwed these hanger bolts in to them (worth saying only one place I could find hanger bolts after an extensive search - thanks Woodfit).

There you go, one temporary table. We might even put a picture on the underside, so it looks nice on the wall.
Posted by Sam Bailey at 5:10 pm 3 comments:

HD Sound - is there much point?

A number of radio companies (notably Absolute Radio, and the BBC, who I work for) have started experimenting with programmes being available in "HD Sound". This sounds really exciting! Ever the early adopter, I decided to look into this a bit more to see if there was something my area (Radio 1) was missing out on. I was disappointed.

I don't know what I was expecting - something that would blow me away, I guess, like my HDTV does every time I switch from channel 101 to channel 143 and notice the difference between BBC1 and BBC1HD. And maybe that's the wider problem here - I'm not as much of an audio fidelity snob as I am a picture quality snob.  I can't hear much difference above a 192kbps MP3, and I know lots of people can.  That notwithstanding, I still expected more excitement.

HD Sound offers better quality sound (of course), but really that just means higher bit rates on digital files (whether that be via higher MP3 rates like the BBC, or the FLAC lossless codec like Absolute). And that's the big difference point with HDTV, which is high quality distribution, but it's also a fundamental change in the production of content as well - better cameras, better sets, lossless editing, etc etc. An HD TV channel is encoded in a higher bit rate yes, but its content is also (sometimes) made in HD as well.

In the most part, sound production has been high quality and digital for decades, with not a lot of room for further improvement.  Add to this the fact we've had a high quality distribution medium in our lives for years already (my Dad got his first CD player when I was 5), and digital distribution is just playing catchup; HD Sound seems to be an umbrella term for various attempts to reach CD quality on the web.

Which brings me to my final point of difference. HDTV is on my TV, just like old TV was. I can easily compare the difference, which adds to the impression it makes. HD Sound or HD Radio is not radio at all - it's a file that you download on your computer. If you have to consume it in that way, why not just stream the uncompressed WAV files? In this world of ubiquitous high speed Internet, what difference does a few hundred megabytes really make?

Calling "higher quality than radio" versions of programmes "HD Sound" is perhaps useful for marketing, because it does instantly make you think of higher quality. But audience members expecting as awesome an experience as they get with their HDTVs are probably going to be massively underwhelmed.
Posted by Sam Bailey at 2:24 pm 1 comment:

Inane commentary over Back To The Future

I watched Back To The Future the other day, and realised I think the same thoughts every time I see it (and that must be at least 20 times).  So I decided to tweet my inane thoughts.  Here they are.  Watch BTTF and read these along with it.