Back to the Future

I went to see the digital re-release of Back To The Future tonight. It's one of my favourite films, and I fear this will be one of the last times I'll be able to say I'm watching a 25-year-old film on the big screen for the first time. I've seen this film maybe 20 times, on video and DVD, perhaps mostly recently only a year ago. I honestly didn't expect to say I appreciated it for anything more than the rip-roaring tale I know and love.

But something weird happened in the cinema - I and the other people around me found the film funny. I've never found the film funny before. I've found it thrilling, massively entertaining, tense, spectacular; but never laugh-out-loud funny. I was laughing at it like I'd never seen I before, and I think other people (plenty of 20- and 30-something blokes in the audience) were too. So why?

The main source of humour was the nuance of Doc Brown's facial expressions. I'd never noticed how clown-like and comical Christopher Lloyd's performance was. I'm sure part of noticing this was the sheer size of the image in front of me, and the digital clarity. That, combined with the film getting probably the closest attention I've ever given it (as there's nothing else to distract you in the cinema). 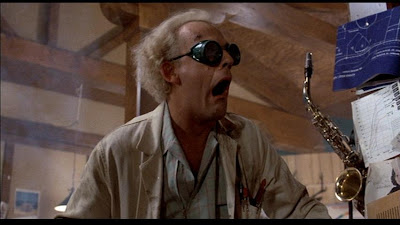 The collective viewing experience surely has a lot to answer for here as well. I may have imagined it, but as soon as one person laughed, it was like the cinema had given everyone else permission to laugh, and the giggles got more intense as the film went on.

I guess it's also easy to forget that this movie was a massive family blockbuster. It being a classic had somehow made me forget how really silly it is. Moments like "buffoon Biff" bringing in a box of books for "new George", and like the daft historical society lady collecting money for the clock tower, had the audience guffawing; I remember them being in the film, but never being that worth noting.

I'm left with a hunger for more classic movies that I never saw on the big screen. But there's not a lot left. Other people have mentioned Ferris Bueller, Goonies... but somehow I only managed to see these films once I was a student. I remember being aged 5 reading a Back To The Future comic that I got in a box of Shreddies, and not seeing the film until I was 10, and that was on VHS. To see it on the big screen tonight was a joy, and I don't think that's going to happen again.
Posted by Sam Bailey at 10:22 pm